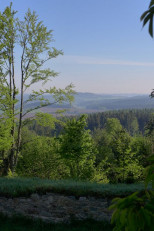 2 kilometres east of the town of Humpolec there lies a widespread ruin of Orlik Castle there. In the course of centuries this castle's appearance has been changed by extensive restructurings mirroring both financial resources of its tenants and modifications in a character of the fortifications - a reaction to the new (warlike) methods bent on conquest: a cannonry spreading en masse in the 15-th century.
Rudiments of the castle date back to the end of the 14-th century. The first written document which has been handed down from that period speaks of Jindrich from - Dube sewed in the Humpolec dominion. The castle was primarily caBed Humpolec and it had been referred so in literature tin the end of the 15-th century. That time the castle belonged among the smaller constructions. It comprised of an L - shaped palace and a gateway protected by a bulky prismatic tower standing askant towards a northern wall. There could be found a vast outer castle northerly there with a bailey which connected it with the wery castle. The whole building was surrounded by a moat and a circumvallation. The castle was protected by a steep slope on a western side.
At the beginning of 1416 Jindrich from Dube died and the castle get into the hands of the Leskovecs (Lords from Leskovec) under who an appreach to the castle and its overall disposition were considerably changed.

Wide- ranging structural inprovements took place there also under Trcka Lords from Lipa (a start of the 16-th century). The architectural changes occurred in both interior and exterior of the castle. Great attention was paid to working-up its striking power. A new pentagonal structure of stone fiDed in with a soil, a so-caned •bastion•, emerget in a northwester part of the area. In the midlle of the 16-th century the Trckas got into financial problems and newly started extensive reconstructions turned into cheap and simple corrections. That time the castle was given its present name Orlik.

Since the middle of the16-th century Orlik had gone through the hands of manifold tenants. They moved In accordance with a shift of a style of living from unpretentious castle halls to chateaux in vicinity thus leaving the castle to go to the dogs. The castle area was apparently used for agrestic purposes only.
Since a start of the 18-th century Orlik had stage by stage fallen into oblivion and, becoming a ruin, it had been dismantled as a source of bulding meterial.

In 1911, when a total collapse of a donjon was at hand, the first structural measures were executed.

Further fa-safe step together with excavations were carried out on an initiative of the then Czech Tourists' Club during the years of 1939-1941. The whole upper castle had been excavatad and the appurtenant waDs preserved.